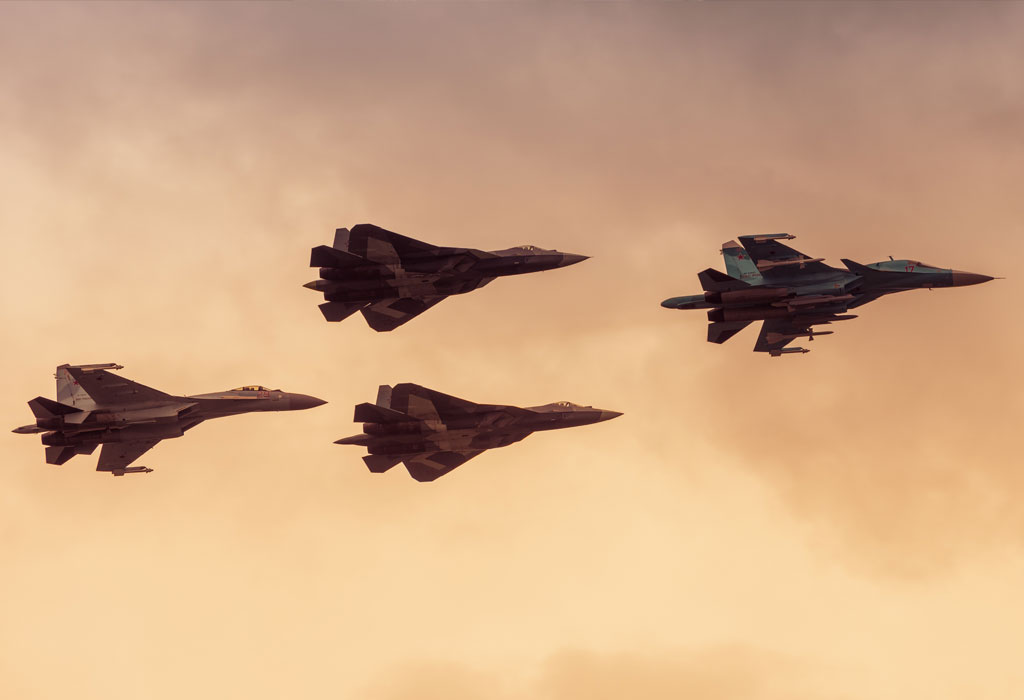 The F-35 is designed with the entire battlespace in mind, bringing new flexibility and capability to the United States and its allies. Reliance on any single capability — electronic attack, stealth, etc. — is not sufficient for success and survivability in the future. Missions traditionally performed by specialized aircraft — air-to-air combat, air-to-ground strikes, electronic attack, intelligence, surveillance and reconnaissance — can now be executed by a squadron of F-35s.

Electronic Attack
Advanced electronic warfare (EW) capabilities enable F-35 pilots to locate and track enemy forces, jam radars and disrupt attacks with unparalleled effectiveness. Advanced avionics give the pilot real-time access to battle space information with 360-degree coverage and an unparalleled ability to dominate the tactical environment. Data collected by sensors on the F-35 will immediately be shared with commanders at sea, in the air or on the ground, providing an instantaneous, high-fidelity view of ongoing operations – making the F-35 a formidable force multiplier while enhancing coalition operations. This system allows F-35 pilots to reach well-defended targets and suppress enemy radars.

Air-to-surface
The F-35’s very low-observable (VLO) stealth allows it to safely enter defended airspace areas without being seen by radars that 4th Generation and earlier legacy fighters cannot evade. The combination of the stealth features, active electronically-scanned array (AESA) radar technology, and the aircraft’s ability to carry its full component of weapons stores and fuel internally allows F-35 pilots to engage ground targets at longer ranges without being detected and tracked, using precision-guided munitions and air-to-air radar-guided missiles to successfully complete air-to-ground missions. In this “clean” configuration, the F-35 will enter the air battlespace first, clearing the way with air dominance for follow-on legacy coalition forces to operate with relative impunity.

Air-to-air
The F-35’s integrated sensors, information and weapons systems give pilots an advantage over potential threat front-line fighter aircraft. Compared to 5th Generation fighters like the F-35 and F-22, legacy aircraft have a larger radar cross-section (RCS), which means they can be more easily detected by enemy radar. In aerial combat, legacy aircraft have relatively equal opportunities to detect and engage one another, while a 5th Generation fighter pilot can see enemy aircraft first and take decisive, lethal action from a stand-off distance. The ability to see and not be seen is redefining previous generation air-to-air tactics.

Intelligence, Surveillance and Reconnaissance (ISR)
Drawing on the advantage of stealth, advanced sensors, and data fusion providing enhanced pilot situational awareness, F-35 pilots can fly critical ISR missions with more sophisticated data capture than any previous fighter aircraft. The F-35 has the most powerful and comprehensive integrated sensor package of any fighter aircraft in history, giving pilots 360-degree access to “real-time” battlefield information. The information gathered by F-35 sensors can be securely shared with commanders at sea, in the air or on the ground, providing a comprehensive view of ongoing operations.

Much of the F-35’s electronic warfare and ISR capabilities are made possible by a core processor that can perform more than 400 billion operations per second. This core processor collects data from the classified electronic warfare suite, developed by BAE Systems, to identify enemy radar and electronic warfare emissions and, as happens with the eight sensor Electro-Optical Targeting System (EOTS) providing the pilot 360-degree coverage, recommending which target to attack and whether he or she should use either kinetic or electronic means to counter or negate the threat.

The F-35’s stealth capabilities are unprecedented in tactical fighter aviation. An integrated airframe design, advanced materials and other features make the F-35 virtually undetectable to enemy radar. Extensive analysis and flight test of the survivability of the F-35 with its combination of stealth, advanced sensors, data fusion, sophisticated countermeasures, and electronic attack demonstrate conclusively its superior advantages over legacy aircraft.

Interoperability
When it comes to having a ‘quarterback’ for the coalition joint strike force, the inter-operable F-35 is clearly the aircraft for the leadership role. The F-35 is designed to share everything it can see with other aircraft and operation centers to expand situational awareness across the entire network of aircraft. F-35s can support legacy aircraft, as well as other F-35s, to achieve mission success and survivability using a combination of stealth, electronic attack, information sharing, and other measures.

Full Mission Systems Coverage
The term “mission systems” refers to the avionics, integrated electronic sensors, displays and communications systems that collect and share data with the pilot and other friendly aircraft, at sea and on the ground. The F-35 has the most robust communications suite of any fighter aircraft built, to date. Components include the AESA radar, EOTS targeting system, Distributed Aperture System (DAS), Helmet Mounted Display (HMD), and the Communications, Navigation and Identification (CNI) Avionics.